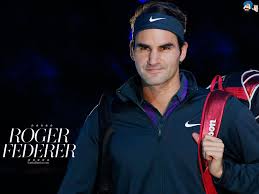 Everyone in this world draws inspiration from someone – be it their parents, teachers, a famous personality or even themselves. These people who inspire us become our role models. We admire their qualities and try to emulate them in our lives. If we are self-inspired, then we say, “I am my own role model.” Ideally, we all are our own role models but there is someone else, who inspires us and makes us better role models and inspirations to ourselves.

My role model, the one who inspires me to be a better person is Roger Federer. He inspires me, not only because he has won seventeen Grand Slams but also because of his excellent sportsman spirit. He has a ‘never-say-die’ attitude which drives him throughout the game. This is one of the most admirable quality according to me. The other qualities which I admire are his simplicity, on court etiquette, behavior with other players and graceful sportsmanship on losing.

Despite being a legend in the world of tennis, Federer is simple and does not show off after scoring a point, as most tennis players do. I admire this quality of his because many a times when we react too much to a situation, especially a positive one, we tend to hurt the opponent. Federer seems to understand the opponent’s feelings and does not hurt them by over reacting as every player toils hard and equally deserves to win. I would definitely like to emulate this quality.

Another admirable quality is his on court etiquette. He is very well organized and does all his work by himself. This is one quality which I really need to emulate. His behavior with other players is very pleasant. He congratulates the winner whole heartedly and shows amazing sportsmanship even if he loses. This is because he never gives up and fights until the last point. That is the reason for this positive attitude. Once during a Wimbledon final, he narrowly lost to Novak Djokovic and during his post-match interview, he said, “Novak played excellently, I didn’t play bad either and it was a lovely day”, before waving to the crowd. All the other tennis players consider it an honor to play against him. If they defeat him, they first mention how honored they were to play against him and win. The crowd loves him even if he loses. All this is because of his pleasant nature and true sportsman spirit that he is an inspiration to so many people all round the world.

Besides these qualities, I simply adore the fact that Federer has won 17 Grand Slams. If there is one word to describe his game it is: EPIC. As Andre Agassi rightly said, “It’s real simple. Most people have weaknesses, Federer has none.”

Roger Federer truly inspires me to be a great sportsman and a role model.

And then there were five

The Fair is where you get Cotton Candy 🍭
The world belongs to those who read 📖
The one with all the street food 🍱
POV: You’re in uni and hunger strikes….🥪
What greater gift than the love of a cat? 🐱
Scenes from a picnic 🧺
A dream is a wish your heart makes….
On Wednesdays, we wear Pink™️
The Royal House Tour 👑 👑👑👑